It seems like we just went through this, but that’s because we just refinanced our house late last year.  I was confident that we would never do it again, but I was wrong.  We currently have a 3.25% interest rate, and I just locked in a 2.625% rate with Aimloan.com.

We refinanced with Aimloan before, but this time I was determined to find a better rate elsewhere.  After doing a whole bunch of searching, they were the cheapest now as well.  Since I’ve gone with them before, I now know exactly how they work.  The rates they advertise on their home page are lower than anywhere else, but they have higher closing costs.  So right now on their site, you’ll see a 2.5% interest rate on a 15 year fixed mortgage with 0 points.  I still chose the 2.625% though, because the closing costs go from ~$2700 to ~$1800.  Since I’m paying the closing costs out of pocket (so they don’t get added to my loan amount), I wanted to keep the costs as low as possible.  The difference in interest rate is only a few dollars per month, so it doesn’t make sense to add $900 to the closing costs.

I will actually have around $1600 in closing costs though, because I did my research when we refinanced last time, and found a title company close to where I live that does an excellent job and has lower fees.  I’d suggest you do the same if you refinance, as it can save you some money.

Our monthly payment will drop by $120/mo, but it will add about a year’s worth of payments from the beginning of our other loan.  I looked at what our payoff date would be if  we put that $120/mo back into the loan every month, so we still pay the same as what we do now, and we would pay the loan off 6 months quicker than our existing loan!  And by refinancing and paying extra every month, we’ll save almost $10k ($11,200 – $1600 in closing costs).

You might think that it was foolish to refinance last year and again this year, but I did the math on that as well.  It wasn’t as bad as you might think.  We paid our house down by an additional $6000 than we would have with the older loan.  I know some of you might say that we could have paid that down even with the old loan, but the reality of the situation is that we wouldn’t have done that.  Even if we did force ourselves to pay the extra amount, refinancing still only costed us around a hundred dollars more, based on the difference in interest rates and closing costs we paid.  We were almost to the break even point.

I’ve learned my lesson in saying that this is the last time we’ll refinance, but rates would have to drop to around 2% or lower for it to make sense again.  We’ll see how it goes.  But if you have a rate around our current amount (3.25%) or higher, you might run the numbers for yourself to see if it makes sense to refinance.  It did in our situation.

This post is a little later than I would have liked, but I wanted to wait until we got our professional pictures back.  We went with a different photographer this time (who was amazing!) and she came to our house a week after Blake was born to take pictures.  Since she does this in her spare time, it took her a couple weeks to get the photos to us.

He opened his eyes for most of the photography session.

He’s pretty good and doesn’t really cry, unless he needs his diaper changed or is hungry.  Of course, he has his days and nights mixed up, just like Brooke did.  It’s hard to get him to go to sleep at night, because he doesn’t want to wake up until around 9PM, and he wants to stay awake until somewhere between 11PM and 1AM.

One of Megan’s coworkers made this hat for him.

My family has a history of making the first born son’s middle name after the first name of the father, and I followed right along with that tradition. 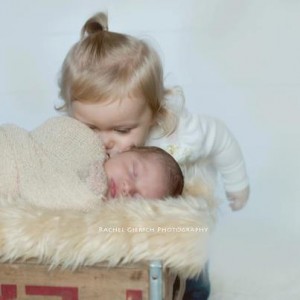 Brooke kissing her little brother. She never really did this at the time of this picture, but now she does all the time.

He sleeps through everything, including Brooke screaming, the dogs barking, and anything else.  But he was awake for most of the pictures, and Rachel had to wait a long time for him to finally fall asleep.

The labor was much easier this time around for Megan.  Instead of pushing for 3.5 hours, she pushed for 22 minutes (7-10 of which she had to stop to wait for the doctor to get all the way across the building).  The doctor we used this time was calm throughout the process, and didn’t make us feel rushed like the doctor we had for Brooke.  The end result was a calmer time after Blake was born, and Megan actually got to hold him right away.

Blake sticking his tongue out on the bed. Brooke was taking a nap during this picture, but the dogs wanted to join in.

If you are in the area and need family photos taken, I’d highly recommend the person we used.  She does great work, is amazing with kids (and very personable), and brings everything right to your home.  Her company is Rachel Gierich Photography.  Head on over and like her page on facebook.

Most people probably think being frugal is the same as being cheap, but that’s not true.  Cheap means you always try to get the cheapest thing possible.

Frugality, on the other hand, is more of a conscience spending behavior.  You might spend as little as possible in less important areas so you can save more money for areas that are more important to you.  Take some of my real-world examples to help clarify.

When my deep freezer went out, my first instinct was to purchase a replacement on Craigslist, just like I did before.  It would be much cheaper than purchasing a new one, and it would keep things just as cold.  But when looking into it further, I found a tremendous difference in operating expenses (read: electricity usage) between the used one I had and a new one.  My older freezer costed me $20/mo to run.  New ones were rated at $2/mo.  That’s a savings of $18/mo.

When doing the math, it ended up being cheaper in the long run to buy a new freezer for $430 than a used older one for around $150.  With the difference in electricity usage, I’d come out ahead after 15 months of usage, with a savings of $18/mo every month from there on out.  As an added bonus, the new freezer should last longer than the older one as well, netting in even more savings down the road.  If I wanted to take the cheap route, I would have bought the $150 deep freezer I found on Craigslist.  But, being frugal minded, I spent almost $300 more, so I could save more in the future.

Our family spends very little in eating out (around $160/mo for a family of three), but we do this so we can spend more in areas that matter (such as paying down student loans).

But we don’t skimp out on everything.  When our dryer went out, we replaced both the washer and dryer with more expensive front loaders that got excellent reviews by consumer reports.  This washer uses much less water and electricity than cheaper models, and of course is Energy Star compliant.  We’ve noticed our clothes smell much fresher as well, and these appliances should last us a long time (the dryer that quit was around 20 years old, and was my parents while I was growing up).

The problem with front loaders, though, is how low they are to the ground.  You have to bend way over to load/unload them, and a laundry basket won’t fit under the door.  They sell stands that fit each brand, but they costed $230 a piece for our brand.  I wasn’t about to spend $500 for stands, so I built my own using wood tossed in the dumpster from the house they are building next door, along with some misc. supplies (drawer glides, MDF board for drawers/front-facing areas, paint, etc.) for under $100.

We don’t buy the latest gadgets when they first come out.  I built my computer in 2006, and I still use it on a daily basis.  My wife’s computer has a strange issue to where it randomly locks up when coming back from hibernate mode, but we haven’t replaced it yet. We just learn to deal with it for now, and eventually we’ll replace it with a more reliable computer.

But my watch is a Citizen.  It’s not because of the brand, but it operates by light.  I’ve had it for 6 years, and have never replaced the battery.  In fact, the band finally broke on it, and I just paid to have it fixed.  The battery should never need replacing, which saves me some money and time every couple of years.

I also believe in more expensive sunglasses.  I like the technology used in Oakley sunglasses, along with the style/fit of them on my head.  My vision used to change yearly, but settled down after I bought a good pair of sunglasses and started wearing them all the time in the sun.  This is one area where I convinced my wife to spend more money than she originally thought for a good pair.  Most of the time I try to convince her to spend less.

I do all the work on my car myself, so I can save money to pay for things that are more important to me.  My next project is replacing the CV joint in my front left tire.  The repair shop that recommended it was going to charge me $300+ to do it for me, where I found a good, new part online for $40.  This tactic, along with building things like the dryer stand, gets an added bonus of giving me valuable experience to do more things myself.  Saving money plus learning new skills is a great combination.

Frugality is targeting your money where you feel it’s most efficiently spent.  Just because we don’t eat out much doesn’t mean it’s not important to everybody.  Everyone has their own ideas of how their money should be spent, and frugality just allows you to align your spending habits with your beliefs.  The hard part is realizing that you don’t have an infinite amount of money, so you must cut out of areas that are of less important.  Doing that is being frugal, not cheap.

Here’s an update on my New Year’s Goals for this year:

Next year, I’m going to go down to one goal.  This is too many to keep a focus on for the entire year.  Things have gotten really crazy this month, since we had our second baby.  Due to that event, I can pretty much bank on not hitting my workout goals for the rest of the year.  At least we can still hit the debt reduction goal, which was my main goal for the year.