This has been a pretty good week for me.  It started out where we got free tickets to the Cards/Cubs game last Saturday, and we got to meet Mike Shannon.  He even held my 2 month old daughter, and gave her kisses.  In addition to that, the Cards won the game 2-1 in the bottom of the ninth inning, while we were standing in the radio booth right behind Mike and John Rooney. 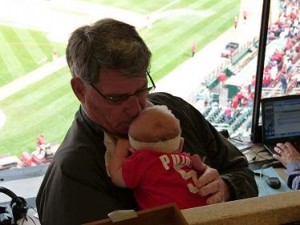 Back to my life now… The car I bought as a third vehicle to drive to work has leaked oil since I bought it.  I’ve finally come to the conclusion that the previous owners did not take very good care of it.  I changed the oil this past weekend, and tried to figure out where the leak was coming from.  I didn’t think I’d end up being able to find it, but I am pretty sure I found the main source for the leak.  Now I just have to take half the engine apart to change out a $10 gasket to get it fixed.

Sort of along those lines, I’m realizing that my thinking is different than most of my neighbors.  We just moved into a new neighborhood that’s in a higher price point than our old one.  I’m realizing that we’re entering that price point of people that would rather pay others instead of doing work themselves.  If they only knew how much cheaper it is to improve your house, fix your car, maintain your yard, etc. is compared to paying someone else…  It’s just a different mindset that I’ll never really understand.  But it does make me happy that I can save money doing all these things myself.  It also gives me the added bonus of saying things like “We did all the work on redoing our kitchen” when people say they love the way it looks.  There’s no better feeling than that.

My daughter’s starting to grow up a little more this week.  We’ve noticed her getting heavier, but she’s also more alert.  She’s getting really good at holding her head up during “tummy time,” and she was grabbing my hand over and over last night.  It gets me excited to see her learn new things.

We got to meet a new neighbor of ours this week.  They just got married not too long ago, and are both very close to our age.  He likes to do all the work himself, and he just finished building a beautiful backyard patio with a built in fire pit.  We talked to them for about 45 mins while we were on a walk this week.  Hopefully we will get to know them a lot better over the next few years.

I’m finally retiring our 26 year old dryer.  It’s had a few issues over the past 2 years, and I’ve replaced a lot of parts in it (doing it myself, of course).  The drying sensor went out, the belt should probably be replaced, and I have a feeling the drum rollers are never going to last more than a couple years anymore, so we decided to get a new set.  My wife’s been wanting front loaders for a while now, so we are finally getting them tonight.  I posted the old washer and dryer up on craigslist last night, and got a call from someone who wants to pick them up tonight.  Hopefully he shows up.

So yeah, it’s been a good week so far.  It’s the little things in life you have to enjoy.

Well, it’s September.  If you followed my earlier post about creating a Christmas budget, you should have 75% of it filled up.  If you still haven’t started, add up how much you spent on Christmas last year, divide it by 4, and save that every month.  You still have time if you start right now, but it gets harder every month.

Here’s some personal finance links I’ve read over the past few months that I wanted to share with you:

Everyone needs life insurance.  If you’re providing income and you’re part of a family (even including a significant other), you should have enough to cover your income if something were to happen to you.  How much is that, exactly?  Dave Ramsey says 8-10 times your income, and I think that’s about right.

I’m a big Dave Ramsey fan, but I have a different opinion in certain situations when it comes to life insurance.  He recommends everyone to always buy term insurance from http://www.zanderins.com.

My insurance company (Country Financial) has an option for a whole life policy for a newborn that is actually cheaper and better than term insurance.  They have an option of paying a one time fee of $800 for a 15-20k life insurance policy on a newborn. Once you pay the $800, the life insurance policy pays for itself, forever.  It also builds up dividends over time, which increases (albeit slowly) your policy amount.

When doing the math, the $800 is cheaper than any plan I’ve seen that piggybacks on your own policy.  It costs less, and lasts the life of the person insured, all while slowly growing over time.

Now, I know my children will need to get their own life insurance policy when they are out on their own, but at least this will cover any sort of burial costs on them, no matter how long they live.  So if they are financially responsible (which I will do my best to raise them that way), they won’t need life insurance once they get older, but they’ll still have a policy to cover any funeral expenses that will ultimately happen.  I think it’s a no-brainer.

So if you have a child, get them a whole life insurance policy similar to what I’m talking about, but make sure they understand how much life insurance they should have throughout their life.

And make sure you’re covered with a term policy as well!  40% of people do not have life insurance.  What are you waiting for?  Click on the link above, fill out some basic information, and get some life insurance!  Everybody needs life insurance.

Having a baby really affects my workout routine (or lack thereof) for my New Year’s Goals.  She takes up all of our time.  I work during the day, then come home to try to relieve my wife a little.  Our baby’s been crying all night for a few weeks now, and that makes it even more stressful.  Hopefully all the crying at night will end soon.

It’s really depressing to look at these now.  I really need to get in a workout routine again, or I’m not going to hit any of those goals.

Today YNAB released an application for the Android phone.  I’ve been waiting on this app for a long time, and am really excited that it’s finally here.  It’s an extension for the desktop application, but it allows you to record everything on the go and sync it up later.  Not familiar with YNAB?  Read up on it here.  It’s the engine behind my finance behavior.

Since this is the first version, they didn’t allow for split transactions to be entered.  The iPhone app was the same way at first, then they added that necessary feature shortly after it was initially released.  They are planning on doing the same for the Android version.

I absolutely love the app, but am disappointed in the syncing.  You have to go to the desktop YNAB, then click on a menu item to sync the two versions together.  I’m lazy, and that’s too much work.  I’ve got the version for the iPhone (on my iPod), and it works the same way.  I end up syncing it once a month or so, so my iPod is always out of date.  YNAB has mentioned syncing to the cloud at some point, so that could solve that issue.

I think I’ll end up syncing my phone up more often though, because I always have it on me.  I think I will end up using it more than my iPod, which stays at home a lot of the time.  I have only paid for a handful of apps on my phone, but this one is well worth the $4.99 price tag.  I just can’t wait until it’s been around a little longer, so they have time to make it even more amazing.