You read a lot about people with a ton of credit card debt, and how paying that off is more important than saving for retirement.  But what about those of us that have no credit card debt, but student loans instead?  Do you wonder if you should be aggressive with those loans, and cut out all retirement investments?

We’ve been saving for retirement while still paying off my wife’s (Megan) student loans.  She graduated just under a year ago, and we’ve had these student loans hanging over our head for as long as we’ve combined our finances.  While she was in school, we paid the interest on her loans with just my income, while paying her current college expenses (so she wouldn’t rack up any more student loan debt).  It was all we could afford to pay.  Once she graduated and got a job, we have gotten aggressive with paying them down.  We’ve made a good dent in them, but still have the largest loans still out there.

Now that we are having a baby, our priorities have shifted.  We won’t have as much income if Megan decides to cut back a day or two on work to stay home with our daughter, plus all the added expenses of raising a child.  This debt that’s been hanging over us has gotten me thinking even more about how we should handle the student loans.

I figured that if we cut down our retirement saving to be the bare minimum, we can pay off all our debt other than our house in 2-3 years.  Since this is just a short term commitment, it won’t have too much of an impact on our retirement savings.  I wish I would have realized this right when she graduated, as we would have been even further on our way of paying down the debt.

If you have student loans, and wonder if you should pay down that debt or save for retirement, my recommendation is to cut all retirement saving and get rid of all your non-house debt.  It’s a short-term commitment that will help you out in the long run.  Some people might argue that you lose more in the long run because of compounding interest, but getting out of debt is just as much mental as it is mathematical.  Once you are out of debt, you can contribute more to your retirement fund to catch up.  Since you only take a couple years off, it’s not that difficult to catch back up to where you were.  Get rid of all non-house debt, then save for retirement.  It’s a much better feeling being debt free than the little bit of difference you’ll possibly make in those 2-3 years investing.

I went to a bachelor party for a really good friend of mine this past weekend, and something unusual came up during dinner.  A couple of his friends I’ve never met before started talking about how they treat finances in their marriage.

The one friend – let’s call him John – said he makes twice as much as his wife, so he splits their expenses to where he pays for 75% and she pays for 25%.  The other friend – let’s call him Steve – said that his household has three checking accounts: a joint account, one for him, and one for her.  I brought up the fact that my wife and I share a joint account, and we pool all our income together.

John’s plan makes sense, right?  He makes more, so he gets more money.  The problem with this approach is that once you’re married, all your expenses legally become both of yours.  Say John’s wife brought $50k in credit card debt into the relationship, and John has no outstanding debt, other than the house they just bought together after they got married.  Now that they are married, they have $50k in credit cards, not just her.  What’s hers is legally his.  Even outside the legal system, this debt needs to be paid off somehow, and what’s the easiest way to do that?  Put all extra money toward it.  In this case, there are two sets of incomes, so they could pay down the debt faster.  But, according to John, his wife would have to pay all of it on her own, while he could go spend money on whatever he wants (like a new car or a boat).  Does that seem fair?

Ok, I know what you’re thinking.  “But we don’t have any outstanding debt, so that doesn’t apply to us.”  Think about this then.  Say John’s wife’s car breaks down, and it will cost her $1000 to get it running again.  Since she only uses her income, she doesn’t have enough to cover the repairs.  John, on the other hand, really wants a fishing boat that costs a couple grand.  Since it’s his money, he can just get the boat while his wife doesn’t have a car to drive to work.  Or maybe he can be “generous” and give his wife some of his money to cover the repair.  Now, does she need to pay him back?  Is it a loan, or a gift?  See how it gets really complicated real quick?

So what about Steve?  Sounds reasonable that he has his play money and his wife has hers, right?  They share the majority of the expenses in the joint account.  He says he would get mad if his wife would buy a pair of shoes out of their shared money, but he likes buying larger items like golf clubs.  So the dual account fixes that problem, right?  Not really.  He mentioned something else that inevitably happens when you have two separate accounts.  He got a raise at work, and decided not to tell his wife.  Instead, he just put all the difference of the raise into his own account.  As I’ve mentioned before, hiding money from your spouse is never a good idea.  This leads to mistrust, which could eventually lead to a divorce.  Money is the #1 reason people get divorced.  He even mentioned that he can’t trust his wife with money.  If you can’t trust your spouse with money, how many other areas can you not trust him/her?  How long can a marriage last when you hide money and can’t trust your partner?

None of these issues exist if you share all your money, and talk about each major purchase.  You and your spouse should be on the same page about your money.  Creating a budget helps us out a ton.  YNAB has been a real lifesaver, and I realize that all the time.  Having this conversation makes me realize how far our finances have come since we got married.  Both of those couples have only been married for about 6 months, so they are still figuring things out.

Hopefully my good friend will figure out something that works for his marriage.  I’m sure he will, as he’s always been good with money.  I offered my advice if he wants it too.  As for those other two couples, I hope they get things worked out in the long run, for the sake of their marriage.

Abby was laying on my pregnant wife’s stomach the other day, so I decided I wanted to try to take some good photographs of our dogs.  Surprisingly, Abby didn’t move when I got up and went all the way to the other room to get the camera.

Abby listening to the heartbeat of our unborn baby 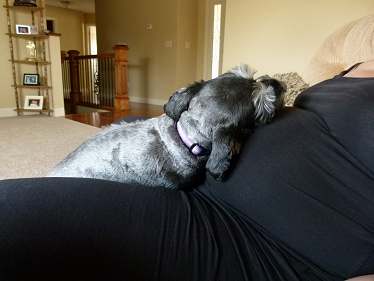 Abby didn’t want to be very photogenic after the one picture though.  She just sat on the couch like this. 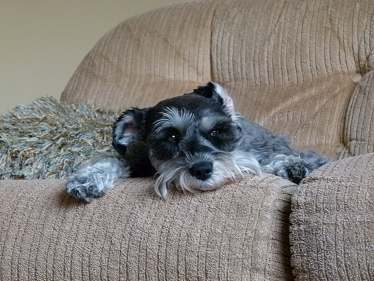 Bella, on the other hand, was ready for some pictures!  I absolutely love this picture.  It really shows the difference between our two dogs.  Bella loves her rope, and always wants to play, while Abby’s just fine laying on the couch. 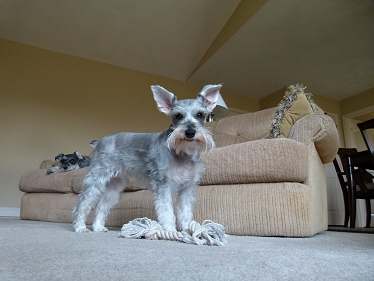 Bella decided to lay down on the chair, and dream of chasing her tennis ball outside.  She’s all sprawled out, and looks really comfy. 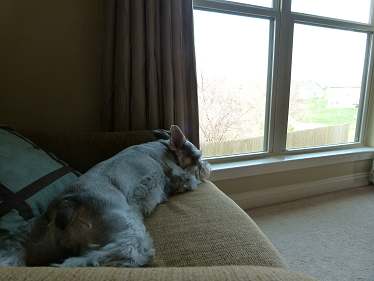 We don’t have any credit card debt, but we do have student loans and a car payment.  We’re on an aggressive schedule to pay off our debt (it’s even one of my New Year’s Goals), but I still freaked out the other day because of the amount of debt we have.  To be honest, it drives me nuts that we have any debt at all.  I just want to get rid of all of it as quick as possible.

I realized that we probably won’t sell our house, which means we won’t be able to eliminate as much debt as I’d like right now.  With the baby coming, it seems like we’ll be more restricted because we have to pay on this debt every month.

My goal with this is to get rid of our car payment as quick as possible.  Once we eliminate that larger monthly expense, I’ll start our retirement contributions back to where they were, if not a little more to try to catch up.  We will still have some student loans left, but they should go by quicker, since we eliminated our largest monthly expense.

If we didn’t have any debt, this wouldn’t be an issue.  It’s tough to make decisions like this, as your future income is hurt no matter what choice you make.  That’s why I chose to get rid of all our debt as quick as possible.  That way we won’t have to worry about making those extra payments, and we can put the money toward other things (paying down the house quicker, more toward retirement, vacations, etc.).

My wife and I spent the whole weekend working on the yard outdoors, and I checked my email tonight and noticed I had a sale on my new store this morning!  All the hard work has finally paid off.  Someone bought a 250ft roll of speaker wire, and I ended up netting about $10 off the sale.  I never thought my first sale would have been that high of a dollar amount.  The sale totaled $72 (including shipping charges).  Here’s to hoping the next one comes pretty soon!

It’s April, so it’s time for a progress update on my New Year’s Goals.  Are you still on track with your goals?  If you’ve slacked off a little, it’s time to pick back up.

Most of the goals should still be obtainable.  If we  don’t sell our house, the debt reduction won’t be hit (but I’m still going to do as much as I can).  I still have to recover most of the funds from starting the business, and we will take another chunk out of our emergency fund once the baby’s born, so the debt reduction will be tough.